The attractions featured in this weeks Coasters Pass are:

Get up close and interactive with living icons of the West Coast. At the National Kiwi Centre you will find Kiwi, Tuatara, Giant Eels, Crayfish and Whitebait. The Centre is situated in the heart of Hokitika and provides the opportunity to get up close and personal with some of New Zealand’s national icons.

The Kiwi is New Zealand’s national icon and part of our world-wide image.  New Zealanders have been ‘Kiwis” since the days of the First World-War.  It is a nickname bestowed by fellow Australian soldiers using their boot polish that had the image of a Kiwi on the tin – placed there in honour of the makers wife’s homeland and it stuck.  Kiwi are a natural fit with New Zealander’s national psyche – we relate to their quirkiness.

The Kiwi is flightless, largely nocturnal and more like a mammal than a bird. Their feathers are hair-like, they have whiskers like a cat and heavy, marrow-filled bones with strong, muscular legs. At the tip of their very long beak are the external nostrils which Kiwi use to find food in the ground. The Kiwi’s large feet have fleshy pads with strong claws, well adapted for digging burrows.

At the Kiwi exhibition, you can engage directly with the centre’s wildlife keeper to learn more about these fascinating flightless birds.  You can see them up close in their nocturnal home, which is a custom-built replica of their natural environment.

Kiwis are an endangered species found only in New Zealand and the National Kiwi Centre takes great pride in supporting conservation efforts to keep these wonderful birds alive and thriving.

The populations of Kiwi endemic to the West Coast are among the most critically endangered.

The Rowi Kiwi is found in the Okarito Forest in South Westland. It is distinguished by its greyish colour and often has white patches on its face. Their feathers are soft to touch.

The Haast Tokoeka Kiwi live in the sub-alpine grasslands near Haast and its distinguishing feature include a brown/grey plumage with a reddish tinge.

Also found on the West Coast is the Great Spotted Kiwi. Its habitat spreads from Arthurs Pass through to the Paparoa Ranges and the north Western top of the South Island.

An exhilarating treetop adventure among temperate rainforest giants. Experience life with the birds, high in the ancient Rimu and Kamahi tree canopy. Easy access for all to enjoy along a steel platform 20 metres high and over 450 metres long through the beautiful West Coast rainforest tree tops. A leisurely 45 minute to one hour stroll and only a 15 minute drive south of Hokitika.

Thrill seekers will feel their hearts pump and the adrenalin rush as they climb to the top of Hokitika Tower 40 metres above the forest floor. A sensational vista of the majestic snow capped Southern Alps and the Tasman Sea are just reward for the climb. Gently sway in harmony with the forest on the cantilevered Mahinapua Springboard. View the exquisite Lake Mahinapua through the richly diverse forest foliage. And enjoy great local foods in the comfort of the Mahinapua Café nestled quietly beside the tranquil Johnnies Creek. The café is open daily from 9 am until 3 pm.

Relax to the birdsong tranquillity as you take in the scenery; the mirror-finished lake amid ancient Rimu and Kamahi trees with the snow-capped mountains in the distance.

Enjoy freedom kayaking or a cruise aboard the Eco Adventurer. Capture the picturesque beauty of the Mahinapua waterways along the original route used by pioneers, gold diggers and early explorers. Experience majestic views of Mt Cook /Aorangi and the Southern Alps along with outstanding West Coast flora, fauna and native rainforests. 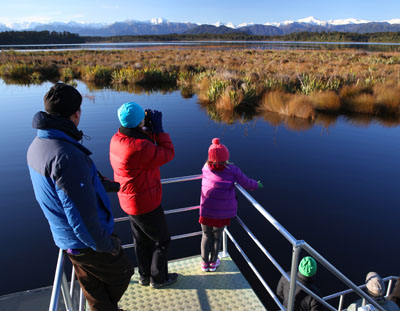