The 30-year old dredge is now for sale, up at Ngahere, about 22km inland from Greymouth. It is understood to be the largest gold dredge in the southern hemisphere and the potential for any buyer to re-commission it is very real.

The dredge was originally built by American company R.A. Hanson and started operation in 1989. However, the company went into receivership eight months later and Birchfield Minerals purchased the dredge in August 1992 and worked the goldmining operation until 2004. 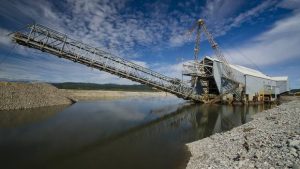 The dredge lay idle from 2004 until 2009 when further resource consent were granted and the dredge was re-commissioned, working through to 2012.

At the end of that work the gold dredge was mothballed due to resource consent issues and falling gold prices. But now, in 2020, gold is close to $3000 per ounce, three times what it was then, making the operation of the dredge a viable option once more. Even in average ground in 2020 it is estimated it would generate approx. 30 million dollars of revenue per year.

Some of the machinery used to construct the Grey River Gold Dredge back in 1989 was salvaged from a another dredge, originally constructed by Kaniere Gold Dredging Company Ltd. This dredge and worked in the Hokitika area between 1938 to 1953. In 1957, the dredge was relocated to Taramakau River where it worked until 1978 when it was dismantled. The Grey River Gold Dredge is one of the few bucket-line gold dredges still operating in the world today and is the last of its kind on the West Coast.

This video was shot last week and shows how the restoration following the Grey River Gold Dredge created 3 farms and improved river protection in the Grey River. Its operation provided a major economic boost for the Grey Valley, creating jobs and export income.